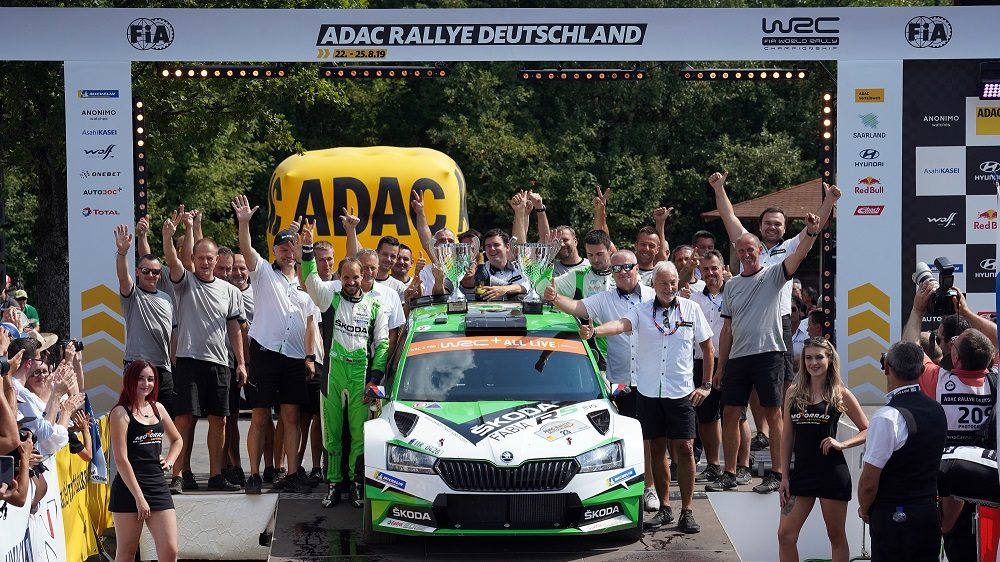 Google has announced that it will make one of the most anticipated changes by users and app developers, which will appear in Android 12....
Read more
Communication

Fiber rates vs unlimited data: can we hire just one?

Unlimited data rates are here to stay. At the gates of the massive activation of 5G, with more speed, more capacity and less latency,...
Read more
Communication

Realme prepares the fastest USB charger for laptops and mobiles

He record to create a USB C charger with fast charge it has been surpassed year after year. Currently, the fastest charger on the...
Read more
Entertainment

It's time to close the October releases with the games that will be released on Xbox One . A list that will not differ...
Read more

Bosen, 25 August 2019 – Scoring their best result of the 2019 season, Jan Kopecký and codriver
Pavel Dresler (CZE/CZE) powered their ŠKODA FABIA R5 evo to WRC2 Pro victory at
ADAC Rallye Deutschland (22/08/–25/08/2019), tenth round of the FIA World Rally
Championship. Teammates Kalle Rovanperä/Jonne Halttunen (FIN/FIN) recovered from a
setback on Saturday, when they slipped off the road, to third place in the category. Thus
Rovanperä increased his lead in the WRC 2 Pro drivers’ overall standings. Since its
homologation in April 2019, the new ŠKODA FABIA R5 evo remains undefeated in its
category of the FIA World Rally Championship 2019. Again the Czech rally car also was
dominant in the WRC 2 category for private teams. Both driving the ŠKODA FABIA R5 evo
for the very first time, German crews Fabian Kreim/Tobias Braun and Marijan Griebel/Pirmin
Winklhofer secured a double victory.

After Saturday’s stages on the gruelling military area of Baumholder, the final leg of the ADAC
Rallye Deutschland, tenth round of the FIA World Rally Championship, lead the teams back to the
lovely Mosel vineyards. Four stages on a sunny Sunday morning had to be mastered. The 28.06
kilometres of “Grafschaft” were an early wakeup for the crews.
The challenge for the two ŠKODA works crews was clear: Recently crowned Czech Rally
Champions Jan Kopecký and Pavel Dresler had to defend their lead in the WRC 2 Pro category.
Also driving a ŠKODA FABIA R5 evo, Kalle Rovanperä and Jonne Halttunen, who had been in the
category lead until a small off-road excursion on Saturday morning, had to secure their third
category position and valuable championship points.
On the opening stage of the day, Kopecký started cautious but could nevertheless extend his
category lead. “The stage was hard – there was a lot of gravel on the road and some muddy parts
in the forest. So I really had to be careful,” he said. His young teammate Rovanperä added: “In the
morning, it was quite slippery on hard tyres. I was cautious, but it was good.” Having said that, he
emerged as the quickest driver of the category.
Eventually, Jan Kopecký and Pavel Dresler defended their lead until the finish and conquered their
first WRC 2 Pro category win of the FIA World Rally Championship 2019. Kalle Rovanperä and
Jonne Halttunen took no risks with their ŠKODA FABIA R5 evo. With a third place in the WRC 2
Pro category they secured valuable championship points in both drivers’ and manufacturers’ overall standings.

In the WRC 2 category for private teams, Fabian Kreim (German champion 2016 and 2017) and reigning German champion Marijan Griebel, both being supported by ŠKODA Auto Deutschland, secured a double victory on their first event with the new ŠKODA FABIA R5 evo.
ŠKODA Motorsport boss Michal Hrabánek was delighted at the podium near Lake Bostal: “Congratulations to Jan and Pavel for bringing home this victory thanks to a great performance. We are proud, that our new ŠKODA FABIA R5 evo remains undefeated in its category in the FIA World Rally Championship. This is a big reward for the great work the whole team has done. After their mishap, Kalle and Jonne made the most of the situation by finishing third in the WRC 2 Pro category and collecting valuable championship points!”

The Swiss have chosen to prioritize economic stability. By rejecting a proposal to curb migration from the EU, they avoid a confrontation...
Read more
Latest news

The news of the death of the London offices is greatly exaggerated. At least that's what KKR thinks. In order for...
Read more
Latest news

Dónall Ó Héalaí, who has received an IFTA nomination for 'best lead actor' for his role in Arracht, has been named on Screen International...
Read more

YouTube launches ‘Shorts’, its own version of TikTok and that’s how...

eSport, gaming and streaming: 3 configurations to play without compromise

How to customize everything you have in the Windows 10 start...

Have your cell phone take a picture if someone tries to...