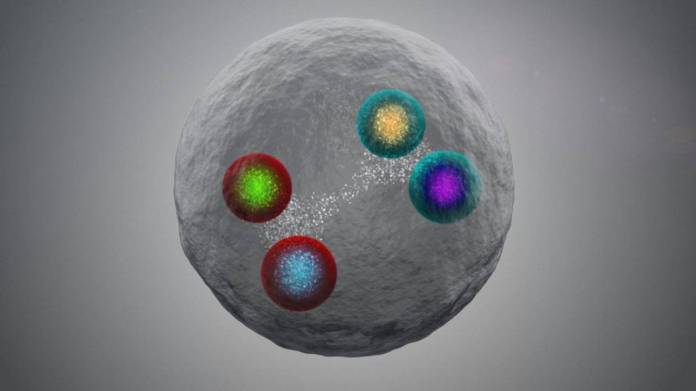 THE quarks they are point particles that are typically found in groups of two (mesons) or three (baryons), the most familiar of which are protons and neutrons. There are six types, or flavors, of quarks: up, down, strange, charm, bottom and top. For the first time a particle with four charms was created: two quark charms and two anti-quark charms.

The quarks, in addition to having given the name to some of the best scientific dissemination programs of Italian television, are fundamental particles within the Standard model (which you can learn more about here), the main theory to explain the behavior of matter starting from its fundamental components.

In a famous 1964 article, American physicists Murray Gell-Mann and George Zweig proposed the existence of particles with four quarks (Tetraquark), adding a quark and anti-quark pair to a meson, or to create a pentaquarks adding a couple to a baryon.

It took about 50 years to obtain irrefutable proof of the existence of this type of particles; in April 2014 the LHCb collaboration showed that Z (4430) + is made up of four quarks. The following year two pentaquarks were observed Pc (4450) + and Pc (4380) +.

X (6900) it was detected thanks to a technique that looks for an excess of collisions, known as bump, against a background of events. Looking through the entire LHCb database, in the period between 2009 and 2013 and subsequently between 2015 and 2018, they detected a bump which consisted of a two quark charm and two anti-quark charm. Another great discovery at LHC, which recently announced the creation of four top quarks at the same time.

The bump had a statistical confidence greater than 5 standard deviations, the usual threshold for being able to announce the discovery of a particle, and corresponded to a mass range in which a tetraquark of this type was expected.

“These exotic particles provided a case on which to test our models for the functioning of ordinary matter, such as protons and neutrons, ” explains Dr. Chris Parkes. “IS It was very exciting to see them appear in a collision with the Large Hadron Collider. “